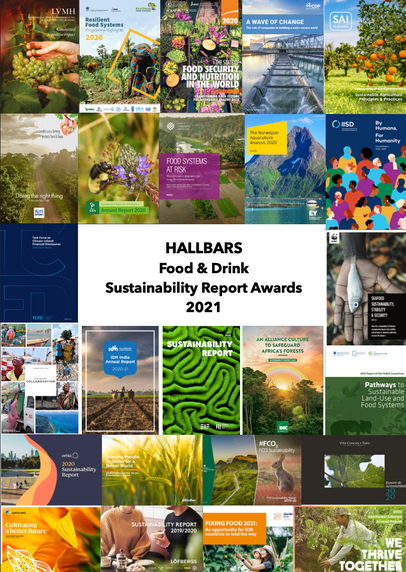 You can download full document by clicking on the image.

BEST IN THE WORLD

The Hallbars Sustainability Research Institute has published the Hallbars Awards 2021 on September 30. The event took place at Alfred Nobel House Björkborn, in Karlskoga, Sweden. The keynote webinar on zoom was organized with FAO from Rome for their Hallbars Hall of Fame Award. The full list is now public, featuring the front cover of each award-winning report, with in most cases a meaningful quote from the chairman or CEO letter.

Here are the first 25 pages of the full document,

To help better the reports, improve their communication, and increase their audience.

The Hallbars Awards consider the reports by themselves, as books, and ranks them, rewarding the teams that created the reports. It puts the report in the spotlight, for its sector, and for the media. It helps increase the readership among stakeholders and beyond.

The Hallbars Awards do not rate the corporations or institutions that publish the reports. There is no evaluation of the achievements or solutions.

The Hallbars Awards are completely international, from the whole world, in any language. They are limited  for now to the Food and Drink sector, a pillar of the Sustainability effort to achieve the UN SDG.

There are now five international jurors. The number of jurors is limited by the need to work nearly exclusively on-line. There was one jury in-person meeting, with three jurors in Sweden, on August 20-22, with two members from Europe, from two different countries, plus one member coming  from America.  Two other members could not travel from Asia, but were on-line for the jury meetings. Three of the jurors are co-founders of other awards, with a combined experience of over 40 years of running awards.The five jurors remain anonymous to avoid lobbying.

Thousands of corporate sustainability reports, integrated annual reports, institutions reports and documents were reviewed, selecting only top quality, from over one hundred countries. The work continues all year.

The shortlist was published August 25, with a maximum of six per category, from six different countries. On the shortlist, there were 537 winners for their country, from 58 countries.

The Best in the World are published on September 30, 2021 during an event at Alfred Nobel House, in Karlskoga, Sweden. The top three all are have the same right to Best in the World. There are 282 Best in The World awards from 51 countries on the list.

On October 21, 2021, there is a small party for the Hallbars Awards at Alfred Nobel House in Karlskoga, Sweden, for sponsors and special guests, by invitation. It is Alfred Nobel birthday, with a celebration in his house and dining room.

The awards ceremony is in Paris, at Les Cordeliers, on Friday, December 3, 2021, followed by a celebration party with food and drink.

Sustainability reports are relatively new. The pionneers were sincere. Some newer recruits are passionate and do great work. Others publish reports to comply with legal requirements or regulations. Many now have to respond to the demand of stakeholders such as investors or their own employees and communities. It is expected that going through the motions will end up making many believers. The Hallbars Awards recognize the need to encourage everyone.

The Hallbars Awards show the Sustainability Champions of 2021. There is a wide range of reports. The overall impact is positive, showing that there are real efforts worldwide for sustainability in both the private corporations and the institutional world. In fact, much more is already being done than really known outside small sectors.

The one word for 2021 is TOGETHER, which appears in hundreds of reports, and quite often in the CEO letters at the start of reports. The pandemic brings everyone TOGETHER. It is true for sustainability reports, and society in general. Even the latest Jamie Oliver cookbook is simply called TOGETHER. Let us hope this new attitude will be more than a word.

" The Hallbars Best In The World Awards are the most prestigious International recognition for sustainability reports. "

- The title of the winning report

- The photo of the front cover

- A quote, usually par Chairman or President or CEO

Here are the first 25 pages of the full document,

You can download full document by clicking on the image.

A02 Best of the Best Corporations

A03 Best of the Best Institutions

A04 Special Awards of the jury

with his portrait by 5 years old son